The animal kingdom is home to fascinating and mysterious creatures that can amaze young and old. Meet the most interesting facts about the manta rays!

1-There are 2 species of manta rays: the reef manta (Manta alfredi) and the giant manta ray (Manta birostris).

2- The largest species is the giant manta ray, whose central disc can measure up to 9 meters wide.

3- It possesses gills in the lower body, through which it obtains oxygen from water.

4-Their diet consists basically of zooplankton.

5-It’s distributed only in tropical, subtropical and temperate waters of the Indian, Pacific and Atlantic oceans.

6-They do not represent a significant threat to humans, but may attack if disturbed.

7-Manta rays have the largest brain of all fish.

8-They often visit sites called “cleaning stations” where some fish species are responsible for removing parasites from their skin.

9-They’re ovoviviparous. The female gives birth to live offspring, but these develop in eggs inside the mother.

10-Both species are classified as “vulnerable” in the Red List of the International Union for Conservation of Nature. 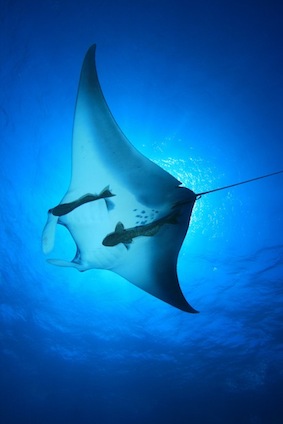 13-They have been observed jumping out of water, presumably to eliminate parasites or to communicate, although there is also the possibility that the act constitutes a game.

14- They have teeth but only found in the lower jaw.

15-These teeth are used to chew food.

17 are not particularly social animals, but often meet when feeding and performing migrations.

18- Their, agile and elegant swimming makes them being compared with birds flapping their wings during flight.

19- They belong to the Elasmobranchii subclass the same class containing sharks.

20- Their skeleton is composed of cartilage and not bone.